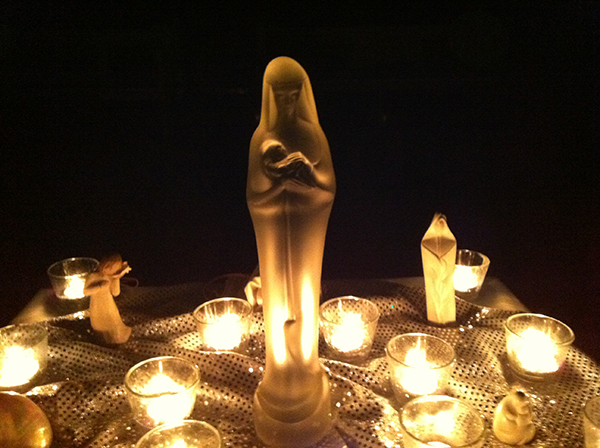 Have you ever been to a ritual or ceremony, expecting to have a real experience – to feel something, to be changed – and you sit there feeling nothing, or you feel bored and disengaged? It’s so frustrating when you’re at a gathering that could be a significant event to honor someone, to grieve a loss or mark a special anniversary, and the ritual falls flat.

With a skilled facilitator, rituals can be life altering and powerfully transformative. People are engaged, energy is moving, hearts are open, emotions are stirring and spirit is palpable.

We’ve been leading rituals for 35 years and we‘ve also participated in many rituals that other people facilitated – some amazing and some not so good! We have witnessed Ritual Leaders who are powerful and masterful and also some who are very unskillful and ineffectual.

We know firsthand how things can go wrong in rituals that are not skillfully facilitated. And we have witnessed many mistakes that Ritual Leaders make and subsequently ruin a golden opportunity. From these experiences we have identified the 7 biggest mistakes Ritual Leaders make.

The first biggest mistake Ritual Leaders make is to fail to set up safe boundaries so everyone feels secure. When people don’t feel safe in ritual space, they close down energetically and may feel traumatized in the ritual itself. There is so much energy moving during a ritual and it may feel scary and unsafe if participants don’t know what the boundaries are. Examples of unsafe boundaries:

Mistake #2   Lack of variety and creativity

The second biggest mistake Ritual Leaders make is to not have enough variety within the ritual itself. An effective ritual makes use of various creative elements to engage the sense, the emotions, the mind, the will and the spirit of all participants. This can include use of altars, candles, music, drumming, meditations, speaking aloud etc. If a ritual only includes the Leader talking, then the ritual will most likely fall flat. This approach lacks creativity and variety and will fail to get the energy moving enough to make the shifts desired.

The third biggest mistake Ritual Leaders make is not engaging the participants enough in the ritual process. A good ritual provides an actual felt experience for participants. People need to feel deeply engaged or they will feel bored and restless and the energy will drain out of the room or space. For example, if you wanted to create a “Rebirthing Ritual”, it would be deeply engaging for participants to actually crawl through a birth canal. Or if you are creating a “Welcoming” ritual for a pregnant mother to welcome her unborn child, you might have each participant whisper into the Mother’s ear a simple blessing for the unborn child. There are so many ways to creatively engage everyone so the group energy can produce the desired result.

The fourth biggest mistake Ritual Leaders make is when the structure of the ritual is chaotic. When a ritual leader fails to structure the ritual with a definite beginning, middle and end, unpredictable things can happen to the energy field. In the beginning of the ritual people might be anxious and if anxious energy is allowed to pervade the space, it will most likely fail. The beginning of the ritual defines the space and calls in the appropriate benevolent spiritual energies needed for the ritual to be successful. If the middle of the ritual goes on too long without a definite purpose, people loose focus. If there is not a proper ending, people may feel stirred up, traumatized and ungrounded. A chaotic structure will not achieve your end results very effectively.

The fifth biggest mistake Ritual Leaders make is to fail to identify and focus the desired intentions of the ritual and of the people participating. If a Ritual Leader fails to help participants clearly focus their wishes and desires before and during the ritual, they will not feel as successful when the ritual is over. When a person is unclear or uncertain in terms of their desired outcome, then it is less likely to occur. For example, when participants write down exact wishes, times and dates before or during ritual space, their intentions are clear and this vibration moves out into the world with more precision and accuracy. Focused intentions create a focused energy field and a target to which the energy can be deliberately sent. Unfocused intentions do not get the desired result.

The sixth biggest mistake Ritual Leaders make is failing to step into their role as the Leader of the ritual. If a Ritual Leader feels insecure, unprepared or immature and cannot hold the sacred space with mature behaviors, it breaks the mood, the energy, the flow and the intention of the ritual itself. For example, when a leader laughs, jokes, giggles, talks in a mundane, conversational voice (as if talking to a friend on the phone), it can easily stop the magical atmosphere of the ritual. An immature leader can also divert the energy and attention of the ritual onto the leader him or herself and away from the purpose of the ritual. People feel uncomfortable and unsure what to do.

The seventh biggest mistake Ritual Leaders make is when they cannot hold an “Archetypal” role, such as playing “The Good Mother”, or “Spiritual Guide” or “The Warrior” during the ritual. In order to transmit the energies of these archetypal characters, a Ritual Leader must be able to enter into the role wholeheartedly, as if acting in a ritual drama. When the leader fails to do this, and cannot hold the sacred energy of that archetype, the people going through the ritual don’t believe you are “standing in” for The Good Mother and will not be able to enter into the experience fully. An effective Ritual Leader will be able to enter “Ritual Acting Mode”, holding the energy of that archetype so people can receive the blessing or the lesson or the words of encouragement.

How to be a successful Ritual Leader

We know many of you in the helping professions want to lead successful rituals but you aren’t really sure how to do it. There aren’t many manuals out there guiding you step-by-step to create a safe, successful, life-altering ritual.

After years working together as Ministers, Spiritual Teachers and Ritual Leaders and training with some Master Ritual and Shamanic Practitioners, we’ve created a program to train you to be a successful Healing Ritual Facilitator™. We teach you how to create powerful rituals and how to be a successful, confident practitioner.

Click here to find out how to become a successful Ritual Leader.

The world today is in great need of skilled, compassionate Ritual Leaders like you who can gather people together to love, laugh, grieve and celebrate.